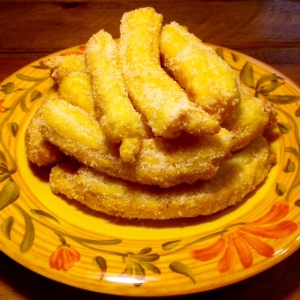 This past week I broadcast my radio show, Table For Two with Naomi Nachman, from the Gourmet Glatt Emporium in Cedarhurst. It is always fun doing a show with a large audience. We had a great line-up of guests, including Seth Leavitt (who owns Abeles & Heymann), Jay Buchsbaum from Royal Wines, Nate Kruman from The Burning Bush Hot Sauce, and Malkie Hirsch from Kiss the Kosher Cook Facebook group.

For our cooking demo segment, we had kid Chef Eitan Bernath of “Chopped” fame, who is climbing to the top of the culinary world at just age 12!

We discussed Eitan’s passion for cooking and his early beginnings, as well as what it was like for him to compete on national television. Eitan demonstrated with ease, in front of everyone, the art of making fresh hot chuorros (a Spanish style doughtnut).
Eitan has kindly shared his recipe for fresh hot chuorros with us all, which I am including below.
To watch the show online go the Nachum Segal Network Channel on YouTube or click here.

In a small saucepot, combine the water, sugar and salt and bring to a boil.

Using an electric mixer, add the eggs, one at a time until fully incorporated. Place the dough in a pastry bag with a large star tip.

Heat the oil in a saucepot to 360 degrees. Pipe the churros into the hot oil and cook until golden brown. Remove from the oil, drain on a paper towel and roll in cinnamon sugar.