Chanukah is the only time of the year when I feel that we have a license to fry without the guilt. As many of my readers know, I love frying foods — from Fried Goat Cheese salad (Shavuot) to Deep Fried Turkey (Thanksgiving). It doesn’t take much to get me to fry something, but I always feel guilty — except for Chanukah where it’s kind of a mitzvah to “embrace” oil!

In deep-frying the objective is to produce foods that have a crispy, golden crust and a thoroughly cooked interior without letting the foods absorb too much oil.  Heat the oil gradually; never let it smoke.  Overheated oils spread a disagreeable odor, gives the food a bitter flavor, and makes the food more difficult to digest.  The temperature of cooking oil is crucial in accomplishing this result.   Bring the oil to the proper temperature, to be determined by using your oil thermometer. The best temperature for the oil is approximately 360º. If the temperature is too low, the fat soaks in — making the food soggy and indigestible.  If the temperature is too high, the outside browns before the inside is properly cooked or heated.

Once the oil is at the required temperature, gently lower the food into the heated oil, using a spoon or tongs.  Do not crowd the pieces. Adding too much at one time makes the oil drop below the proper temperature and does not give room for expansion in foods which puff during frying.  Skim out loose particles of food to prevent smoking.  Remove food when browned and drain on absorbent paper.

The same oil may be used repeatedly if it is not overheated and if it is properly cared for after each use.  When cooking is completed, place a few slices of raw potato in the oil and cook for a few minutes.  The potato will absorb any foreign flavors which the oil may have acquired from the food.  Strain the oil through a very fine sieve or through several thicknesses of cheesecloth or coffee filter.  Keep frying oil well covered in a separate container in a cold place out of contact with air and light.

A final tip: Right before I was going to send this to the editors to print for this week’s edition, I learned this really good tip from my colleague Alessandra Rovati who has a blog called Dinnerinvenice.com. When frying a lot for Chanukkah, to contain the smell, add a few slices of green apple to the frying oil from the start (when it’s still cold).
Ricotta chesse latkes 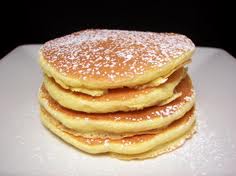