I am visiting my family in Australia, and I thought I would have a go at trying to make my own meat pies so I wouldn’t be so homesick when I got back to New York. My daughter and I made a big mess in my mum’s kitchen but the end result was well worth the efforts (not to mention the mess). Of course my mum made us Pavlova for dessert.  Look for the pavlova recipe posted under desserts on my blog.

An Australian  meat pie is a hand-sized meat pie containing largely diced or minced meat and gravy, sometimes with onion, mushrooms, and often consumed as a takeaway (“to go”) food snack. The pie itself is similar to the United Kingdom’s steak pie.

It is considered iconic in Australia. It was described by former New South Wales Premier Bob Carr in 2003 as Australia’s “national dish”

2  Sprinkle the flour over the meat and cook for 1 minute. Add the beef stock, tomato sauce and Worcestershire sauce. Bring to the boil, reduce the heat to medium and simmer, stirring occasionally to prevent the meat from sticking to the base of the pan, for 10 minutes, or until the sauce is thick. Stir salt and pepper. Remove from the heat and set aside to cool completely.

3  Preheat the oven to 375°. Using a small plate about 8 inch in diameter as a guide, cut four circles from the shortcrust pastry and use them to line the base and sides of four 1 cup pie tins or ramekins. Fill the pastry with the meat mixture – avoid spilling any on the edges.

4  Using the same plate as a guide, cut four circles from the puff pastry. Brush the shortcrust pastry edges of the pies with water to moisten and top with the puff pastry circle. Press the pastry edges together to secure. Trim the excess pastry with a sharp knife and crimp the edges. Cut a small cross in the center of each pie and brush the top with beaten egg.

5 Bake the pies in the preheated oven for 10 minutes, reduce the oven temperature to 350° and bake for a further 20 minutes, or until the pastry is puffed and golden. Serve the pies immediately with some extra ketchup, if desired. 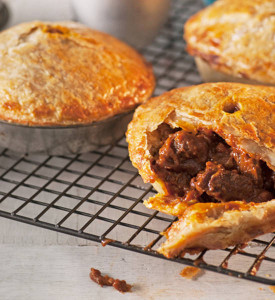