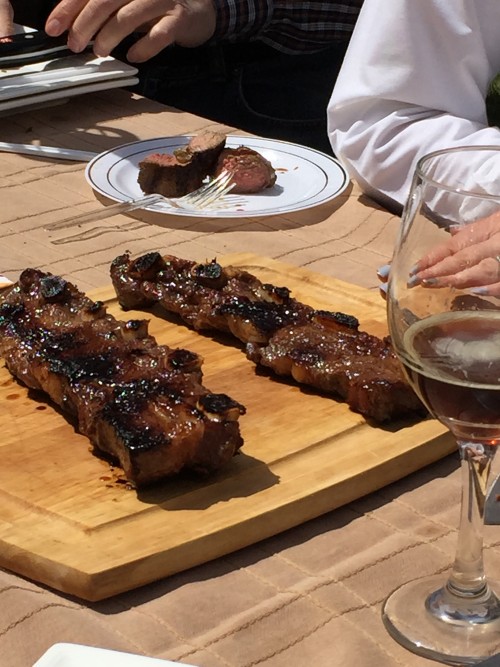 Last week on my radio show “Table for Two” on the Nachum Segal Network, I joined up with another host of the Network, Mark Zomick. Mark hosts The Stunt Show and we did a mash-up of our two shows. We broadcasted our show from Mark’s backyard and barbecued all kinds of meats to show our viewers and listeners how to elevate and demystify barbecuing as we approach the summer months. The shows aired in two parts (one hour each).

On the shows, we presented many interesting BBQ tips, learned about beer and wine pairings from Jay Buchsbaum, marketing director of Royal Wine Corp., and grilled lots of hotdogs and salami’s with Seth Leavitt, owner of Abeles and Heymann. To watch or listen to the two shows go to the Nachum Segal Net Channel on YouTube, or listen on the archives on www.nachumsegal.com.

Here are some BBQ tips we shared with our audience:

Allowing the meat to “rest” from the heat before serving allows the juices, which have been driven to the center of the meat by the heat, to redistribute throughout the meat and be re-absorbed. As a result, the meat will lose less juice when you cut it and be far more tender and juicy to eat.

Try to shake off excess marinade as it can cause the meat to burn. Marinades tend to have sugar which burns fast on a high heat of a BBQ.

Always keep a spare tank of gas when barbequing. You don’t want to run out in the middle of a party. (Fortunately, this did not happen to us on the show as we had our spare tank ready to go!)

You can even BBQ dessert. One great idea is to throw on some peaches or pineapple on the grill for a few minutes on each side.

Mix together the marinade in a large bowl, and then add the meat.
Let the meat sit in the marinade for several hours in the fridge.
Before placing on the grill, let the meat come to room temperature.
Turn on the BBQ and let it get really hot so the flanken will sear. Giving it a nice crust or flavor.
Cook on a high heat for about 10 minute per side. Watch for burning.
Once the meat is cooked through, let it sit on a cutting board for 10 minutes to “rest”.
Slice each strip into smaller portions or serve each person one strip.